The PROFET™ +2 12V family provides as diagnostic feature an analog sense current with an outstanding accuracy (≤ 4% @ nominal load current). It can be used to monitor the application state as normal, overload, open load, short-circuit to ground, short-circuit to battery condition, protective switch off (overtemperature shutdown and overcurrent shutdown), protect the load and the wiring harness and monitor the output current for the purpose of controlling the output power.
The PROFET™ +2 12V family offers two variants that differ in the protection strategy mechanism: Intelligent Restart Control and Intelligent Latch. The first variant has an internal counter which counts the number of fault events (up to 7) before latching. The second variant has an internal latch which protects the output stage in case of a fault event. When the device latches, a reset can be applied to restart the counter.

A unique benefit of the PROFET™ +2 12V family is the pin-compatibility within the single and dual-channel family devices. Based on the identical footprint of its packages, maximum design flexibility is provided, allowing a change of loads and devices without major modification of the board layout.
Compatibility with the hardest reverse battery requirement on the market (ReverseON), reduced internal operating current consumption, simplified and cost efficient ground network, outstanding current sense accuracy, benchmark cranking voltage capability (able to work down to 3.1 V), smaller package size for area savings, design flexibility across the family by pin to pin compatibility and very low output leakage current (≤ 0.5 µA up to 85°C) are the keys for the success of PROFET™ +12V in the automotive market.

Products
Highlights
What makes the newly released PROFET™ +2 12V – ESP devices unique?
What is the Capacitive Load Switching Mode and why is it beneficial?

Why is it complicated to switch a capacitive load?

When switching on capacitors, high-inrush currents occur, which leads to the fact that temperature protection of the smart power controller in standard condition is triggered. Thereby the device latches off and the capacitor remains uncharged.

Why is a Capacitive Load Switching Mode beneficial?

By activating the Capacitive Load Switching Mode, big input capacitors can be charged and capacitive loads can be switched in the safe operating area.  Moreover no discrete pre-charge circuitry is needed, no over-dimensioning of power switches occurs and supply stability is improved by reduction of current spikes during switch-ON.

How to activate and operate in Capacitive Load Switching Mode?

The Capacitive Load Switching Mode is an integrated product feature and can be activated by applying e.g. a 30kHz PMW signal to the IN pin. In this condition, slew rate is reduced, TJ (DYN) protection is set to a lower value and restart is activated. The capacitor gets charged by pumping and overtemperature protection remains untriggered.

With the success of the PROFET™ +2 12V portfolio, a further step was taken to make use of the huge technology potential: to assess the performances of the PROFET™+2 12V family in a more accurate way, the current sense accuracy (kILIS) was tightened.

Benefits of the tighter kILIS accuracy:

Thanks to the kILIS tightening the PROFET™+2 12V portfolio presents the best accuracy at low and nominal current range.

The two graphs on the right, show a comparison between the old and new kILIS tolerance of PROFET™+2 12V BTS7008-2EPA variant:

PROFET™ +2 12V is the new generation of smart high-side switches for automotive and industrial applications based on SMART7 technology. The family offers a single, dual and four channel devices (from 2mΩ to 200mΩ) in PG-TSDSO-14 exposed pad package and provides state of the art diagnostics and protection features.

The family provides outstanding energy efficiency with reduced current consumption, state of the art current sense accuracy (kILIS), benchmark low cranking voltage capability and faster switching/slew rate with no impact on EMC.
The whole portfolio is qualified for automotive applications according to according to AEC-Q100 Grade 1 and AEC-Q100 Grade 0.

The qualification AEC-Q100 Grade 0 makes the PROFET™ +2 12V portfolio also the perfect fit for applications with extended or/and high temperature mission profiles, under the hood applications requiring an extended junction temperature range up to 175 °C and powertrain systems such as transmission application.

The smart switches family PROFET™ +2 12V inherited the sustained technological know-how of the previous families to achieve excellence.
In addition to their different features, you can be sure, when opting for PROFET™ +2 12V, that you will have:

Various support materials are offered by the Infineon: 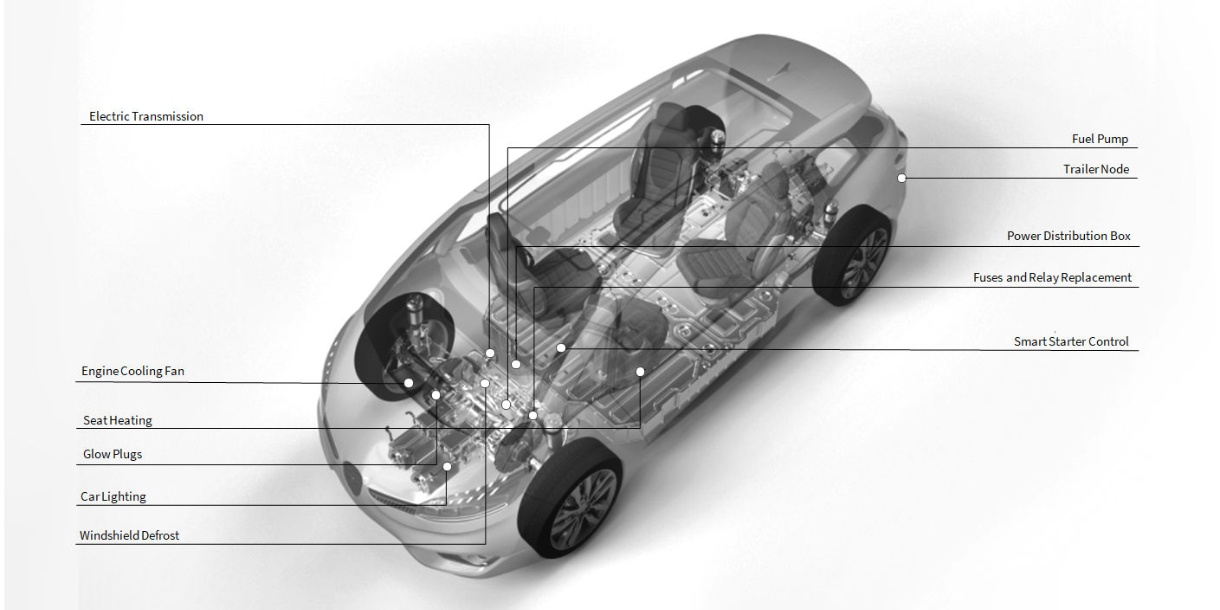 Introduction to the world of Infineon smart switches